Pet Spotlight/Case Study: “Cobii” Rescued and Back to the Basics

“The first time I saw Cobii, he was on social media at a Fort Worth shelter in October of 2018. In his video, all I could hear was barking dogs in the background. The poor little guy was skinny (between 8-9 pounds), was in a cold-looking metal crate and he was trembling (as chihuahua dogs usually do). He supposedly was a stray that someone had adopted, kept for 2 months, then brought back to the shelter. 🙁 He had patches of white fur, and tons of dark, pink, scaly skin that looked extremely painful. His big brown eyes looked so sad, scared and cut right through to my heart. 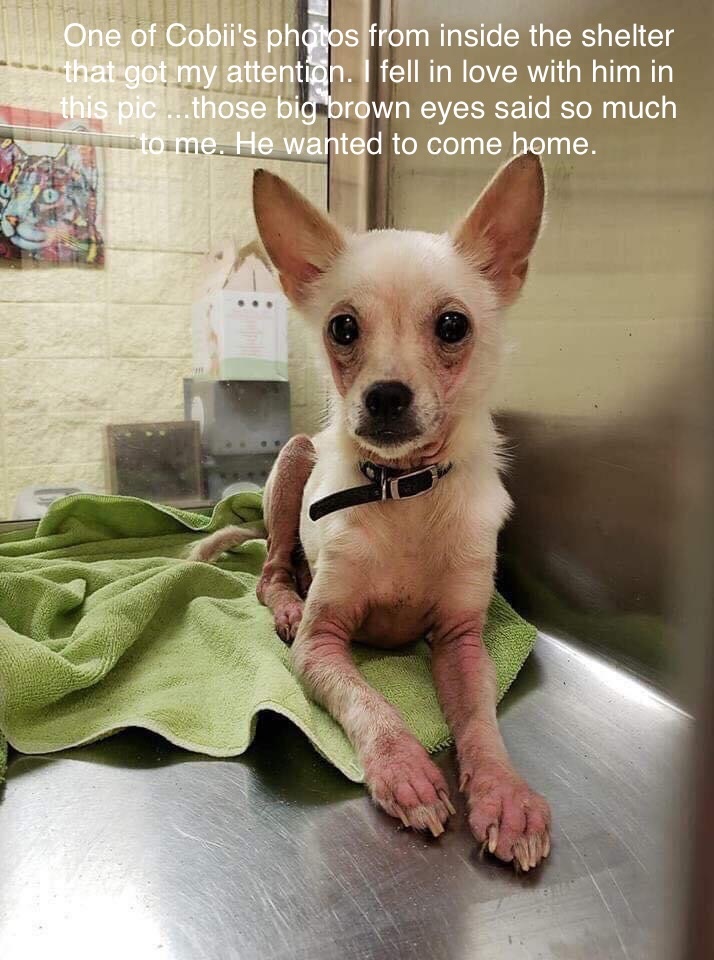 I checked in on him through social media for several days, hoping someone would step up to get him, because he had been “coded red”, meaning, he was on the euthanasia list. Nobody was stepping up, so I commented about him and was told a rescue organization had to “tag him” and a foster needed to step up.

This had to be fate, because a sweet lady with a local rescue organization responded to my post and said they were looking for a 10-day foster which would allow them the time they needed to save this little guy. I told her I needed to check with my hubby, but I would get back to her. Well, we already had 5 dogs and a 6th would be over what our city allowed in a home. My hubby knew that if he came into my home, that there was a better than great chance he was never leaving. So, to ensure we could help this pup, I agreed with my hubby that I couldn’t adopt the dog unless my hubby initiated it. Perfect! Now everyone involved felt comfortable and we could make plans to pick up this special little guy!

We made all the arrangements and met someone from the rescue for the transfer. When she handed Cobii to me, his skin was really warm, sticky, scaly and he was a bit stinky. We immediately called our vet and begged them to let us bring him in immediately in to be seen.

Our regular vet immediately said he thought Cobii had mange, or more specifically, sarcoptic mange. After a skin scrape and a blood test, which both were inconclusive, he was treated for sarcoptic mange. I wasn’t 100% comfortable with the diagnosis and went to get a second opinion. The second opinion came back via an allergy test that was performed from blood samples. They said that he had a lot of allergies, including (wait for it…) human epithelial cells. That’s right. Cobii was allergic to human skin!

We tried Cytopoint injections, antihistamines, dips, and some homeopathic remedies. I was bathing this sweet guy every other night and rubbing his skin with coconut oil to try and give him some relief. Not much was working. In speaking to some of my clients who worked in the dog rescue world, it was recommended that I get a third opinion and be certain to see an allergy specialist.

At this point, I was 100% committed to helping this little dog. It probably didn’t help when my hubby spoke for Cobii one night, and said, “I’m really gonna miss you guys when I’m gone.” My husband instantly knew where I was in my attachment at that point, as the tears began to well in my eyes. He immediately contacted the rescue group and initiated the process for us to keep Cobii (secretly, I knew he had grown attached the little guy as well), and we formally adopted him. I didn’t want anyone to fail him or return him like his previous family had done.” 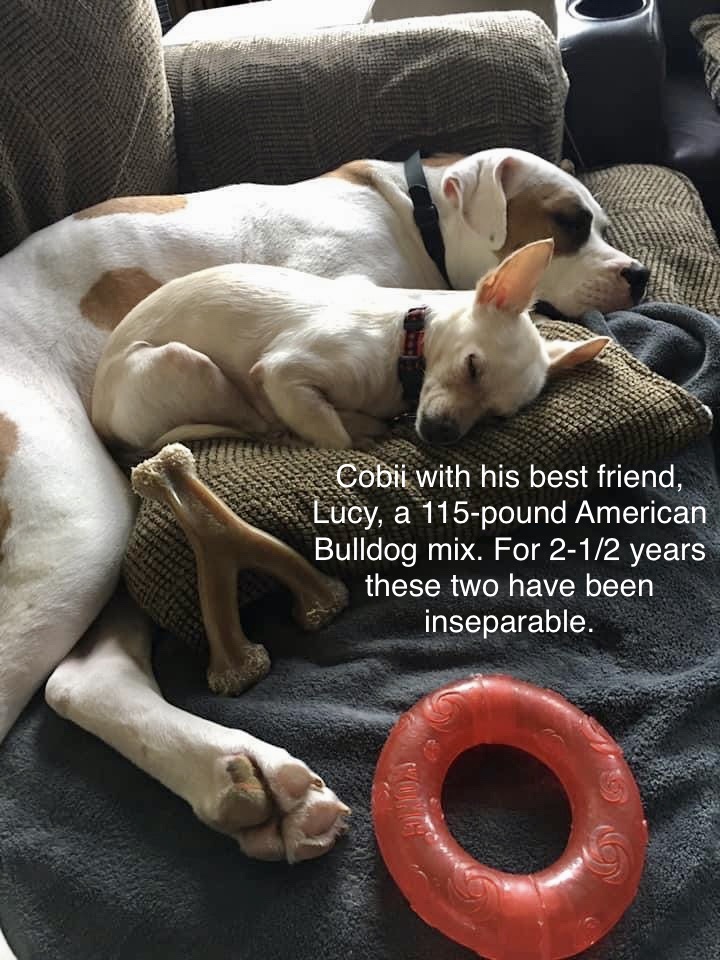 Cobii and His Best Friend Lucy

“This poor guy didn’t even know how to play with toys. We even thought that perhaps the toys we had for our other dogs might be too big, so we bought smaller toys specifically for him. He still didn’t know what to do. Luckily, through this process, Cobii had found a new best friend; our 115-lb American Bulldog, Lucy. They adore each other. It was Lucy that finally taught Cobii about toys, and the fine art of playing. They are inseparable to this day.

Once Cobii was officially a part of our family, we moved in high gear to get him well (as if we weren’t already doing everything possible). We were referred by several clients to take Cobii to Animal Dermatology Referral Clinic of Dallas. We called and got an appointment with Dr. Ho for April 2019.” 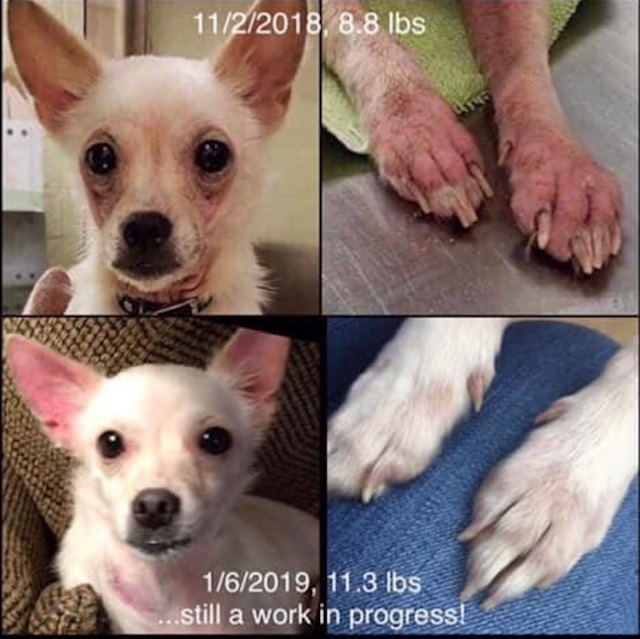 “She reviewed all his info and decided the best thing to do is to go back to the basics and simplify our approach by getting him on a very specific diet and backing off on the coconut oil, as we weren’t sure he didn’t have a sensitivity to that as well. They did some more detailed allergy testing that included scratch testing, which hadn’t been done on him yet. She recommended weekly bathing in a specific shampoo and hydrating creme rinse, and we began immunology treatment to help him not only heal, but to help him become immune to his sensitivities and allergies. It was explained that this may be necessary for several years, or it could be necessary the rest of his life. We would have to see how he reacted over time. While going through immunotherapy, he we would need to take an antihistamine and 2 other pills to help keep him comfortable while helping him heal.

He has been on this regimen for about 2.5 years. Certain parts of the year, as certain environmental allergens increase, he might still get an ear infection, but overall, Cobii is doing well!!”