Zoe is a 6-year-old spayed female Standard Dachshund who came to ADRC for hair loss and scabs progressing over 10 months. When I first saw her, she had severe hair loss and scabs covering her entire face and large patches on her body, along with pigment loss on her nose making it a grayish color instead of her usual black. 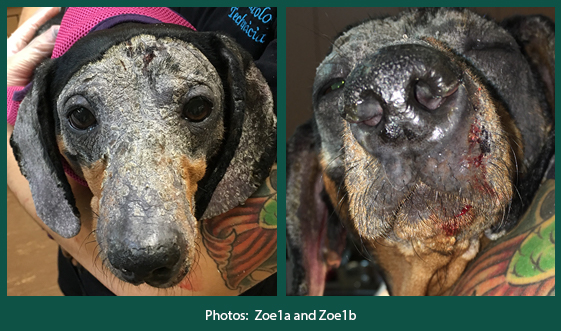 I performed a skin biopsy (a minor surgical procedure done under sedation to remove small pieces of skin, leaving a few stitches). The results showed signs of Lupus, which is an overreaction of the immune system leading to the attack of the skin. We don’t know what causes lupus, but luckily the majority of cases can be controlled with life-long medications. As long as we can wean medications down to a low, safe dose, most pets can live a normal lifespan. I started Zoe on prednisone, a steroid to suppress her immune system and suggested she avoid sunlight since UV light can exacerbate Lupus. By her first recheck a month later, her skin was already looking better! The crusting was almost completely gone, her nose was regaining its black pigment, and some of her hair was starting to regrow. 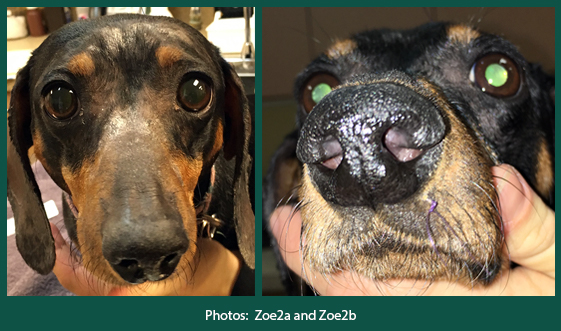 After that, we talked to the owners every 1-2 months to monitor her progress. I added a second immune-suppressing drug called Atopica (cyclosporine) and slowly tapered down the prednisone. Eventually we were able to stop prednisone and wean the Atopica down to three doses per week. At her 1 year recheck, her skin looked amazing! Everyone at ADRC is so happy that Zoe is able to live a normal, comfortable life with her Lupus! 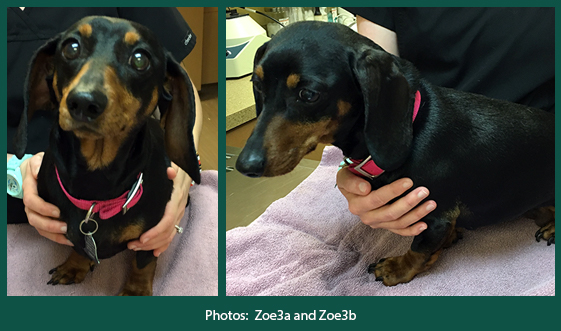