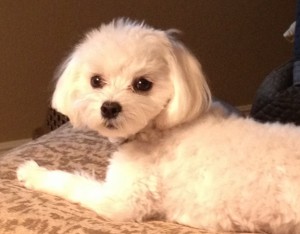 Cody N. was showing tendencies towards being allergic to environmental allergens and was receiving an allergy blocking medication called Atopica®. At his first visit to ADRC in January 2014 he was diagnosed with an overgrowth of mites (Demodex canis) in his skin. These are mites that normally live in the skin in very low numbers. Some dogs experience an overgrowth of these mites. For Cody, this made the situation confusing because we weren’t sure if the mites were really the cause of his itchy skin or whether he had allergies also.

The mites were treated and 6 months later, in early June, Cody was able to take his last dose of anti-mite therapy. His skin remained clear and his pruritus (itch/scratch) score was low until approximately three months later when the mites began overgrowing again and he restarted anti-mite therapy. We did not know at that time if he had an inherent weakness in his immune system or if an allergy flare lead to the relapse of the mites. It became apparent that Cody did have allergies because his skin was always worse when he traveled to Arkansas to visit family. He was itchy and needed therapy for ear and skin infections.

We allergy tested Cody in December 2014 and started allergen specific immunotherapy in the form of allergy drops in his mouth. He finished anti-mite therapy in May of 2015. He is now doing very well and has been off anti-mite therapy for 2 months. Cody is receiving the Atopica® again to help manage his allergies in conjunction with oral immunotherapy. The best news is that Cody can now go visit his family in Arkansas and his allergies no longer flare when he is visiting. He is a perfect example of how skin and allergy conditions take time and patience to diagnose and treat.