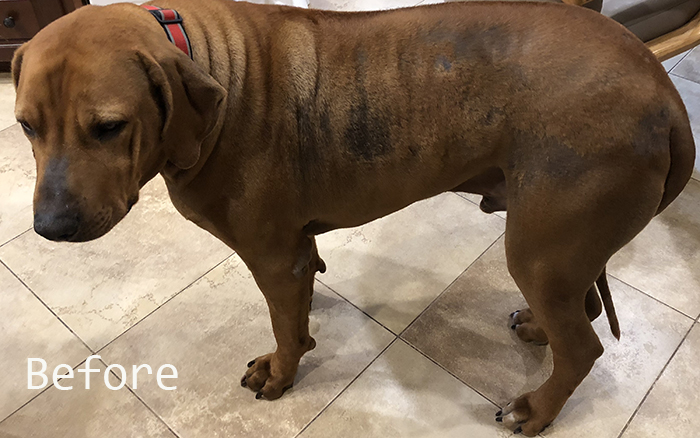 Chewbacca is a 2 year old MN Rhodesian Ridgeback whom visited Dr. Seals this spring with a history of progressive hair loss that started at 1 year of age. During the exam, hair loss was affecting the trunk, tail, base of ears, and the muzzle. Multiple crusts were noted on the abdomen. Antibiotics were prescribed in the past without improvement. The level of itch was ranked a 0/10 (very low).

A cytology of the skin (microscopic examination) was conducted in the clinic and a large number of bacteria were seen on the skin. Due to the recent unsuccessful history of antibiotic therapy, a skin culture was performed. A multi-drug resistant Staphylococcus pseudintermedius was isolated and only susceptible to one type of oral antibiotic. This antibiotic was initiated and continued for 30 days.

During the initial examination it was noted that Chewbacca seemed lethargic for a 2 year old Rhodesian Ridgeback in addition to the other clinical signs (progressive hair loss and ongoing skin infection). He was a young dog, but Dr. Seals conducted a Thyroid panel just to ensure the thyroid gland was functioning correctly. Low thyroid hormone levels are seen more commonly in older dogs (4 to 10 years of age); however, in large and giant breeds the condition can be seen at a much younger age. The thyroid panel confirmed a low thyroid hormonal level and thyroid supplementation was initiated twice daily. 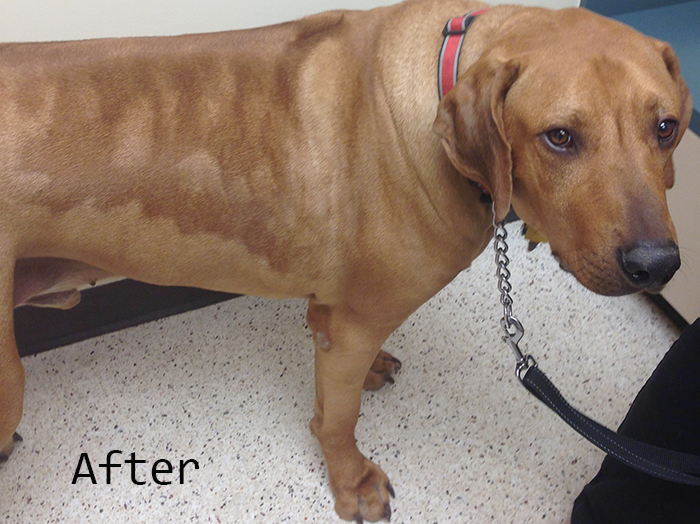 A recheck was conducted after 1 month of the correct antibiotic, and the crusts and bacterial infection were resolved. However, the hair loss remained. Another recheck was conducted 3 months after starting the thyroid supplementation and Chewbacca had greatly improved. He seemed like a different dog with loads of energy. Also, all of the hair had regrown. The thyroid supplementation will be continued throughout the life of Chewbacca.