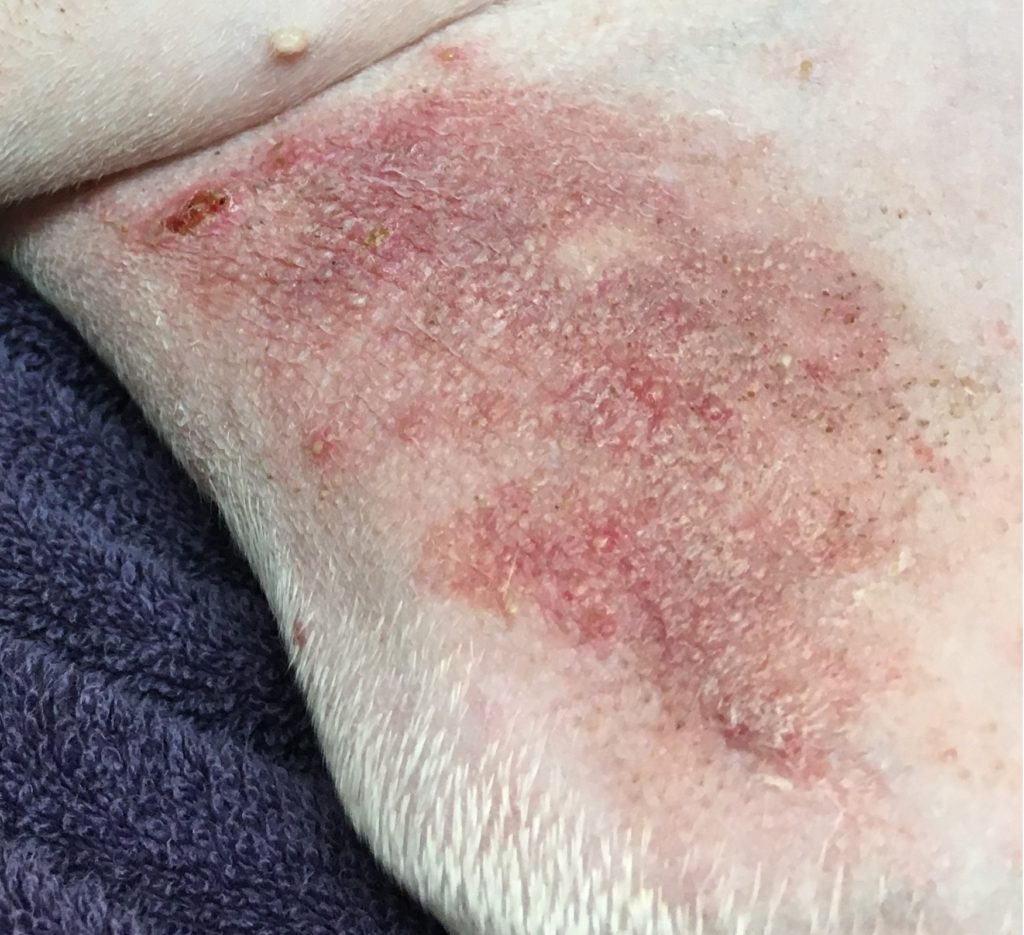 Bizkit first presented to Dr. Gimmler as a 2.5 year old, male Bull Terrier in September 2016. He’d been struggling with itching and skin infections since he was 6 months of age. His skin was very red and lichenified, meaning it was thickened and wrinkled like elephant skin. This is usually a sign that the skin is infected. We found both bacteria and yeast growing on his skin and in his ears, which is secondary to allergies. An intradermal allergy test was performed and we found Bizkit was allergic to numerous pollens from grasses, weeds, and trees, along with molds, house dust mites, Malassezia yeast, Staph bacteria, and flea saliva. We treated infections with the antibiotic cephalexin, the anti-yeast medication ketoconazole, and Animax ear drops. For his underlying allergies, we treated with the steroid prednisone for fast itch relief and started allergen-specific immunotherapy injections (ASIT, “allergy shots”) for long-term allergy control. ASIT is basically a mixture of all the pollens to which he’s allergic. When injected into his skin every 2 weeks long-term, it desensitizes his immune system to he stops reacting to these harmless environmental triggers. 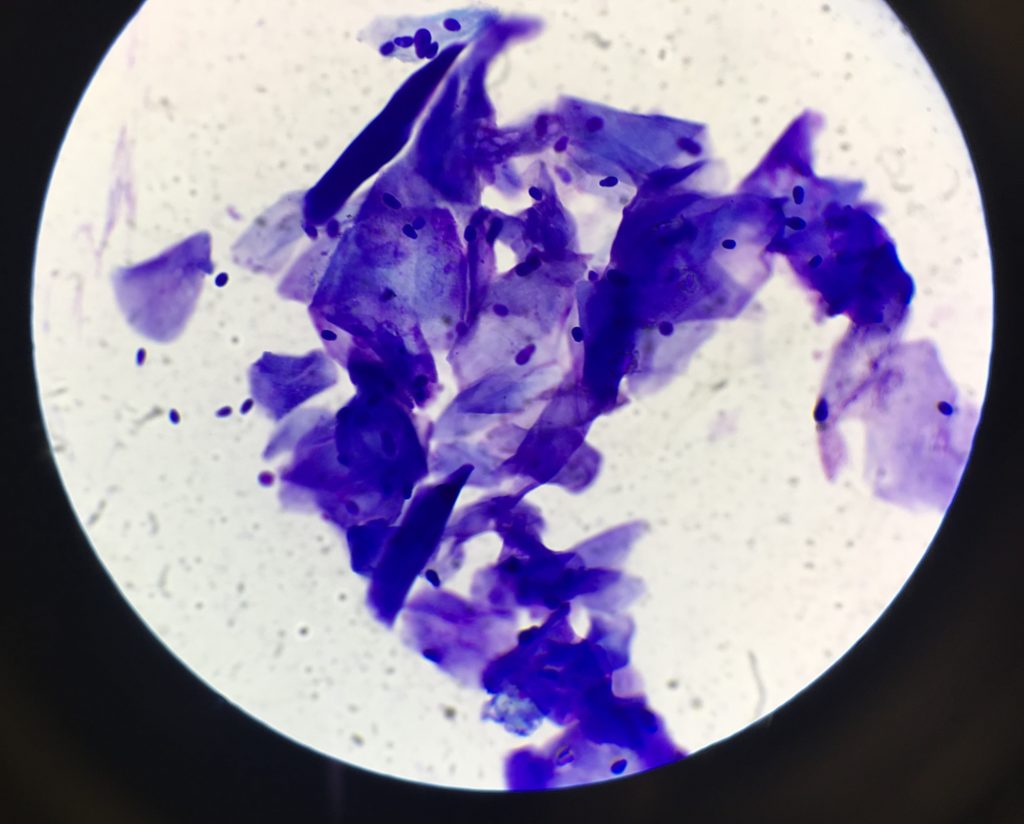 In 2017, after a year of treatment, he was still flaring with itching and infections so we doubled the strength of his allergy shots to try to control his allergies better. By March 2018, his allergies still weren’t controlled, so we changed from injections to sublingual immunotherapy (oral allergy drops). In 50% or more of patients that failed allergy shots, changing to the oral drops will help. Dr. Gimmler also took a close look at his environmental factors and found that he was spending a lot of time outside and he was using Frontline, a topical flea prevention. In dogs like Bizkit who are allergic to flea saliva, the topical preventions are often just not strong enough. Even if fleas are never seen living on them, these patients are getting occasional flea bites when they’re outside. For a normal dog, that would be no big deal; but for an allergic dog like Bizkit, it can be a HUGE problem, leading to allergies that are flared up all the time. We changed to Simparica, a monthly oral flea and tick preventative that works really well to kill fleas fast and lasts at high levels the whole month. 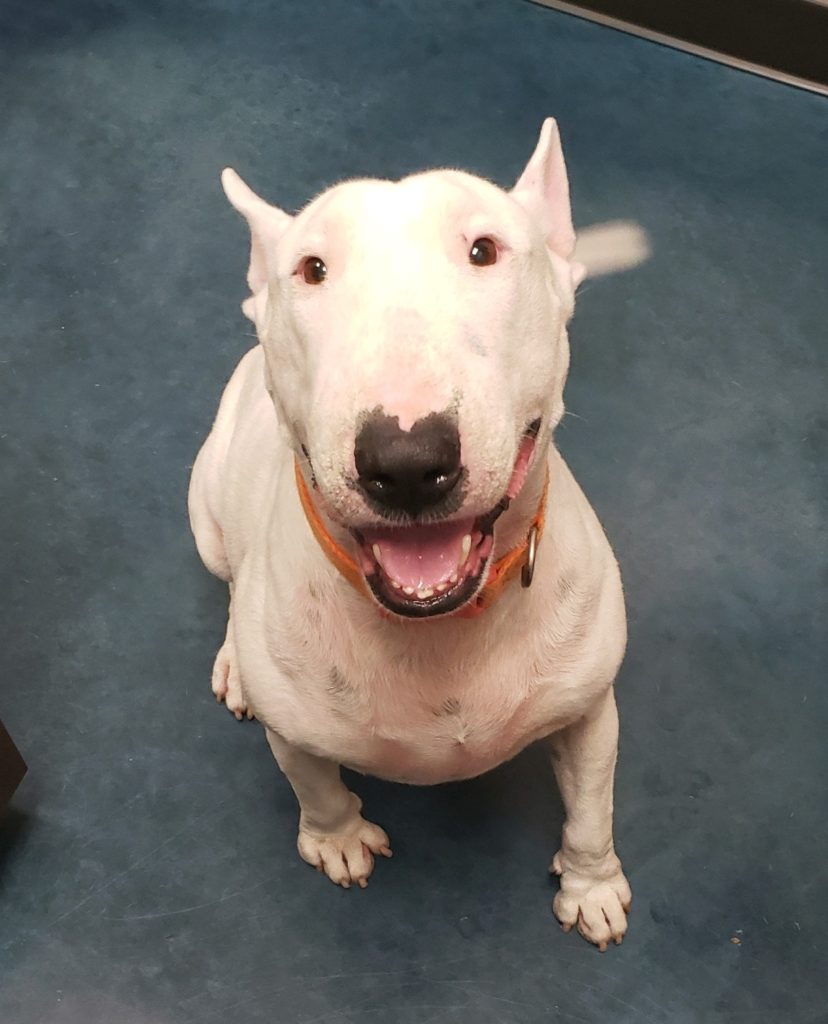 A year later, Bizkit is doing great! He hasn’t had any flares of itching or infections and his skin looks really healthy, even though the oral allergy drops haven’t been given at the full dose. It looks like using Simparica to reduce his exposure to flea saliva made all the difference! Sometimes eliminating one major trigger (like flea saliva) can make all the other triggers (pollens, house dust mites) much, much easier to deal with.

If you have questions about a pet with similar skin changes in your household please contact ADRC to schedule an appointment.