Pet Spotlight/Case Study: “McGee the Cat and His Mystery Sores”

“My cat developed open, raw sores on his face, ears, and nose that wouldn’t heal, no matter what ointments I used.” 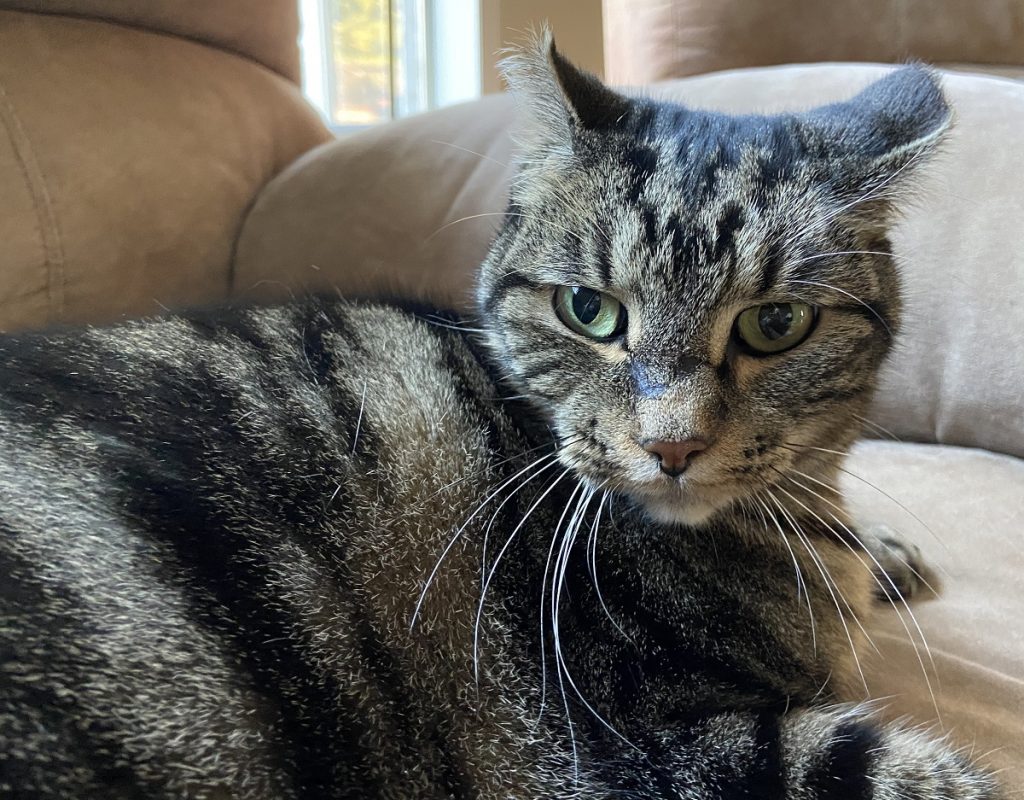 McGee is a five-year-old male, neutered domestic short haired cat with a history of living with other cats, horses and dogs on a 10-acre farm in Collin County Texas. He spent his first year as a feral outdoors, then moved indoors permanently at one year of age, but never traveled outside his county in Texas.

At three years of age his owner noted open bleeding sores on the muzzle and ear tips. Initial biopsies from the affected areas were consistent with the fungal organism Histoplasmosis. McGee’s veterinarian initiated a compounded antifungal to be given daily.

“We went to our regular vet, who did a biopsy, and we began treating him based on the results that were returned.” said his owner Jeanne.

Despite treatment, the skin changes on the face continued to progress. His doctor performed surgery to remove the affected skin areas—removing ear tips. However, lesions returned and persisted in other areas.

“Nothing was working, so the vet performed surgery to remove the sores. Unfortunately, they came back,” Jeanne said.

At this time, his veterinarian referred McGee to Dr. Shanna Seals at ADRC. Initially, she switched the antifungal from the compounded formula—due to reported treatment failures—to a brand name medication. However, even with this change the clinical signs continued to worsen and spread to other areas on the body including the ear and right hock.

“Dr Seals at the ADRC examined the cat and did another biopsy. This time the results indicated a different diagnosis, a rare parasite. We tried several different treatments, with little success. The sores kept spreading and popping up on other parts of the cat’s body.” Jeanne said. 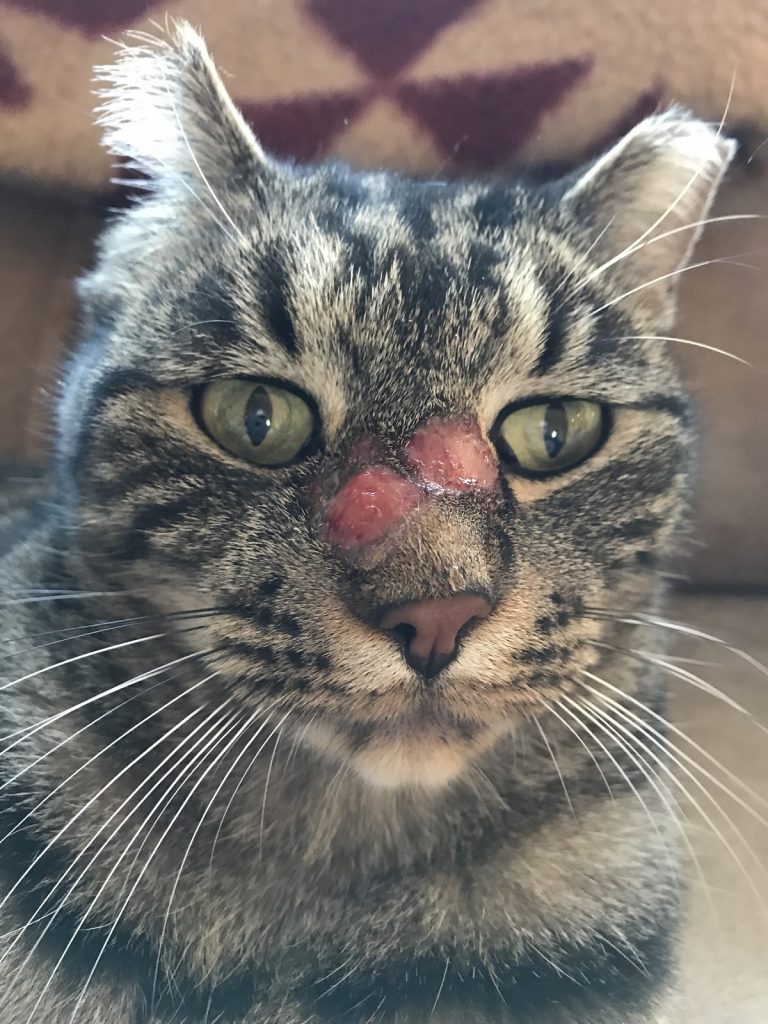 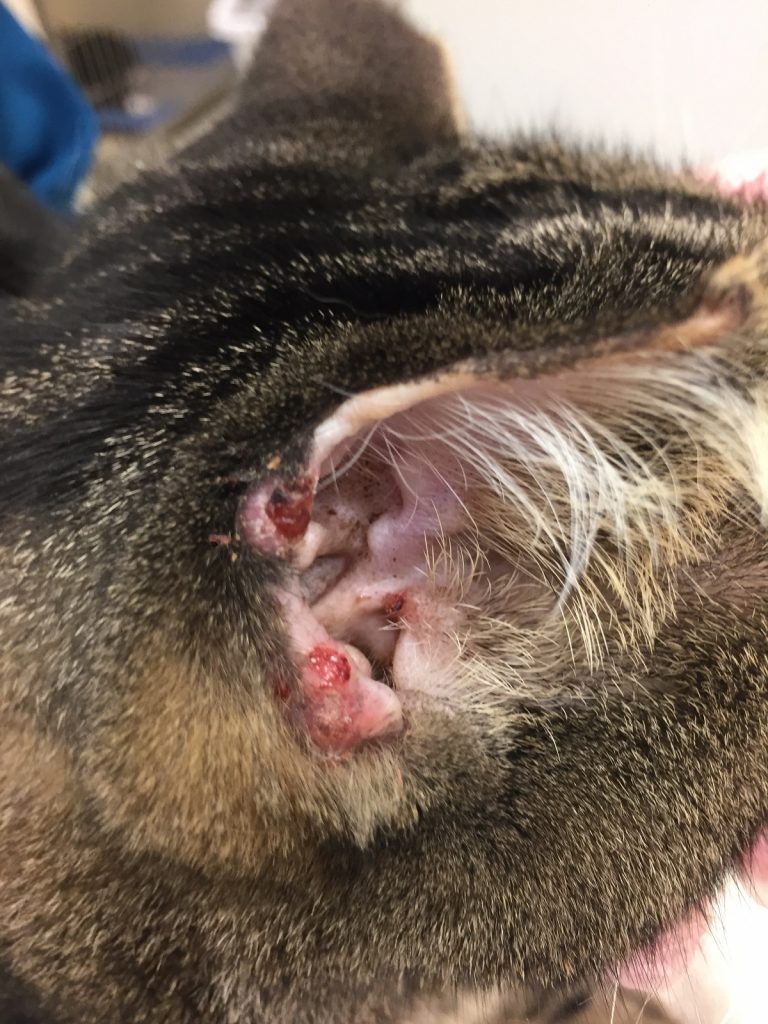 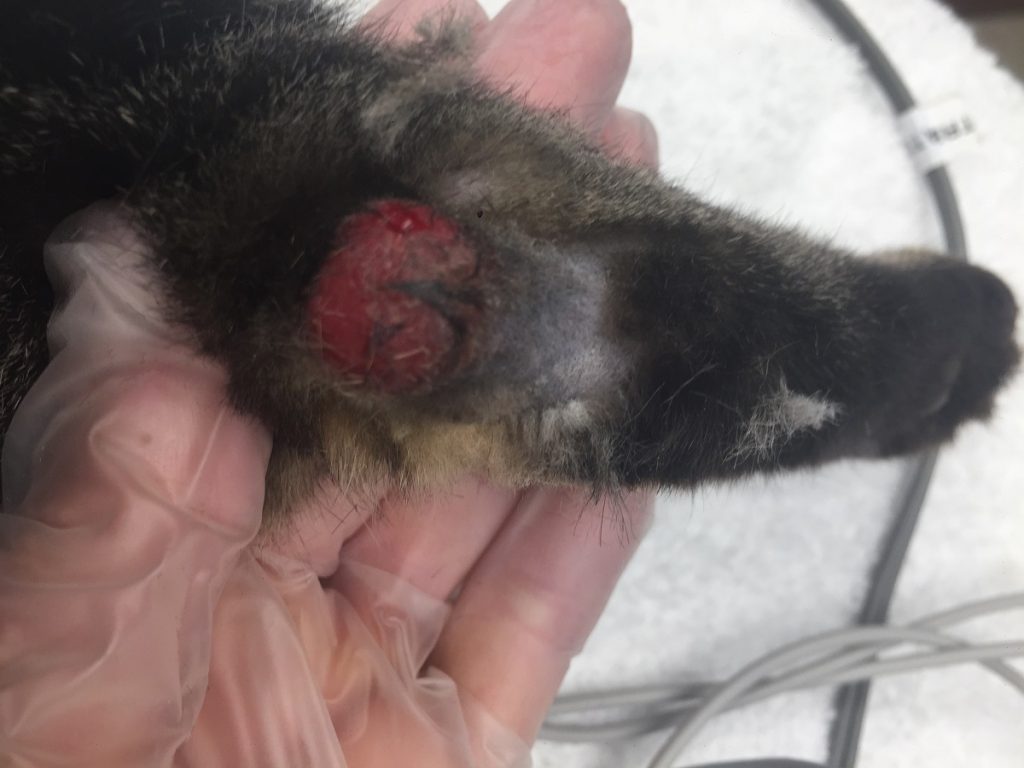 Due to the ongoing progression of skin changes, Dr. Seals biopsied the skin again and sent to another laboratory for analysis. New testing included a PCR (DNA test). Based on this, Dr. Seals diagnosed McGee with cutaneous/skin Leishmaniasis. This new diagnosis explains why the antifungal was not resolving the skin changes as Leishmaniasis is a rare protozoal infection with very few successful treatments. A medicine called allopurinol was started daily and helped improve the skin slightly; however, the sores never resolved 100%. New blood work showed McGee had developed severe kidney changes that required emergency intervention. Dr, Seals discontinued the medication. 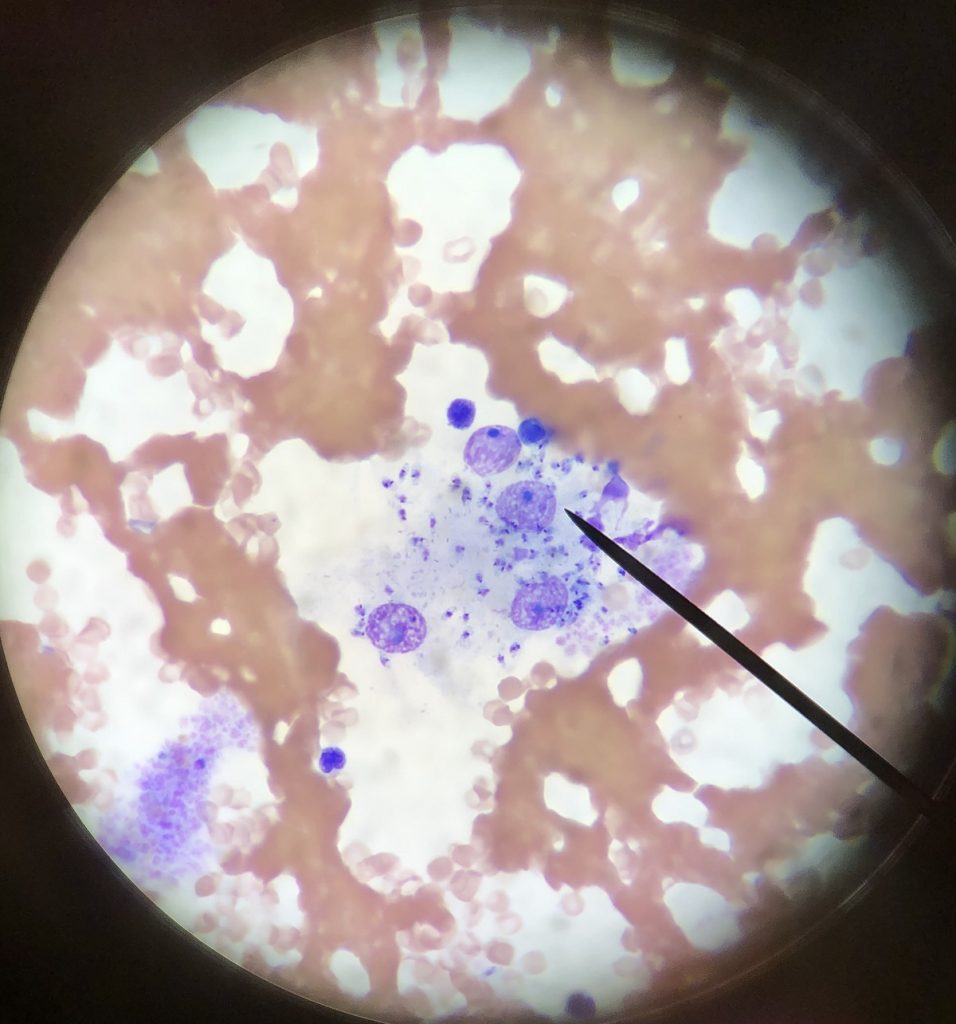 In recent years, a new medication called Impavido/miltefosine successfully treated Leishmaniasis cases in people and dogs. This medication was a good fit for McGee as it had no reported adverse effects on the human or canine kidney. However, this medicine was never tried in a cat and is considered an off label/experimental treatment. After contacting the manufacturer and discussing the off-label use with McGee’s owner, Dr. Seals developed an Impavido/miltefosine based treatment plan. McGee’s owner gave him the medicine orally and daily for several months.

“Dr Seals refused to give up. She spoke with other vets and researchers all over the country and found a medication that had been used successfully in humans and dogs, but never before in a cat. So, she developed an experimental treatment plan—and off we went!” Jeanne said.

The medication reduced lesions and allowed normal skin to develop in the previously affected areas. McGee also tolerated it well based on his behavior at home and regular blood work monitoring. Dr. Seals stopped the medication about 30 days after resolution of the skin signs. McGee continues to do well over a year later. In addition, he receives a topical flea/tick control to decrease blood sucking insect exposure.

“After several months, the sores healed, and have been gone for over a year now. My cat is back to the happy, healthy, loving companion he was meant to be.” Jeanne said. 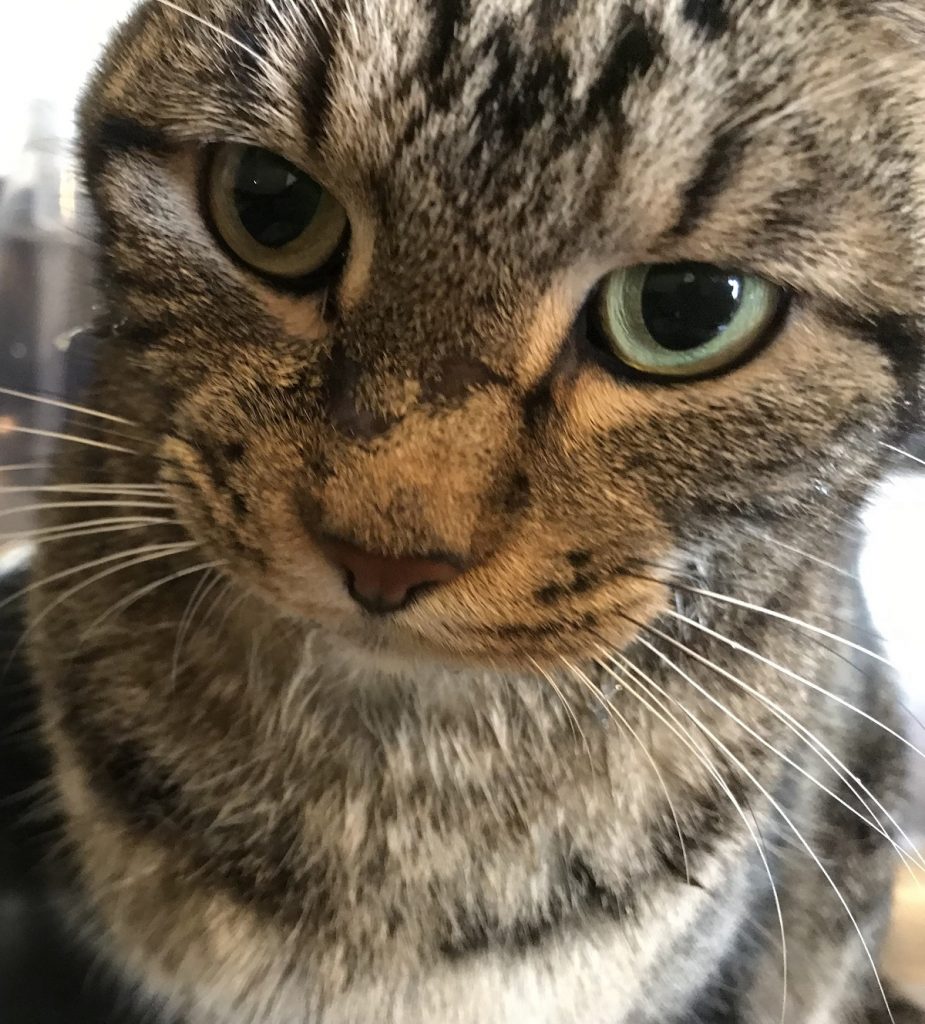 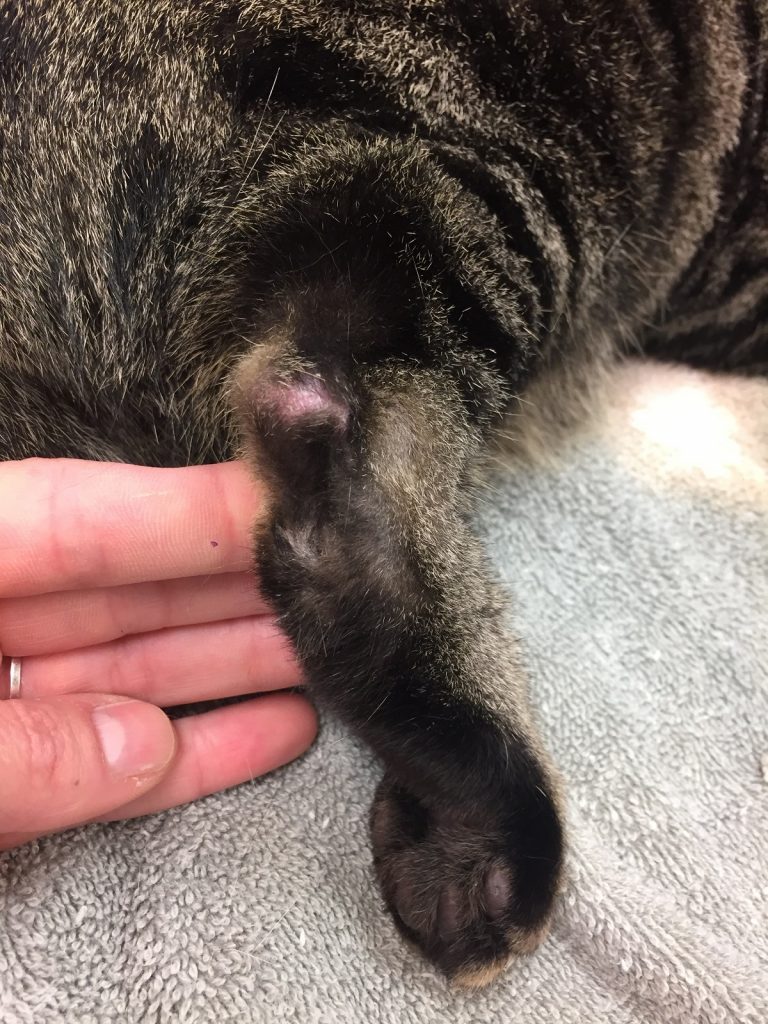 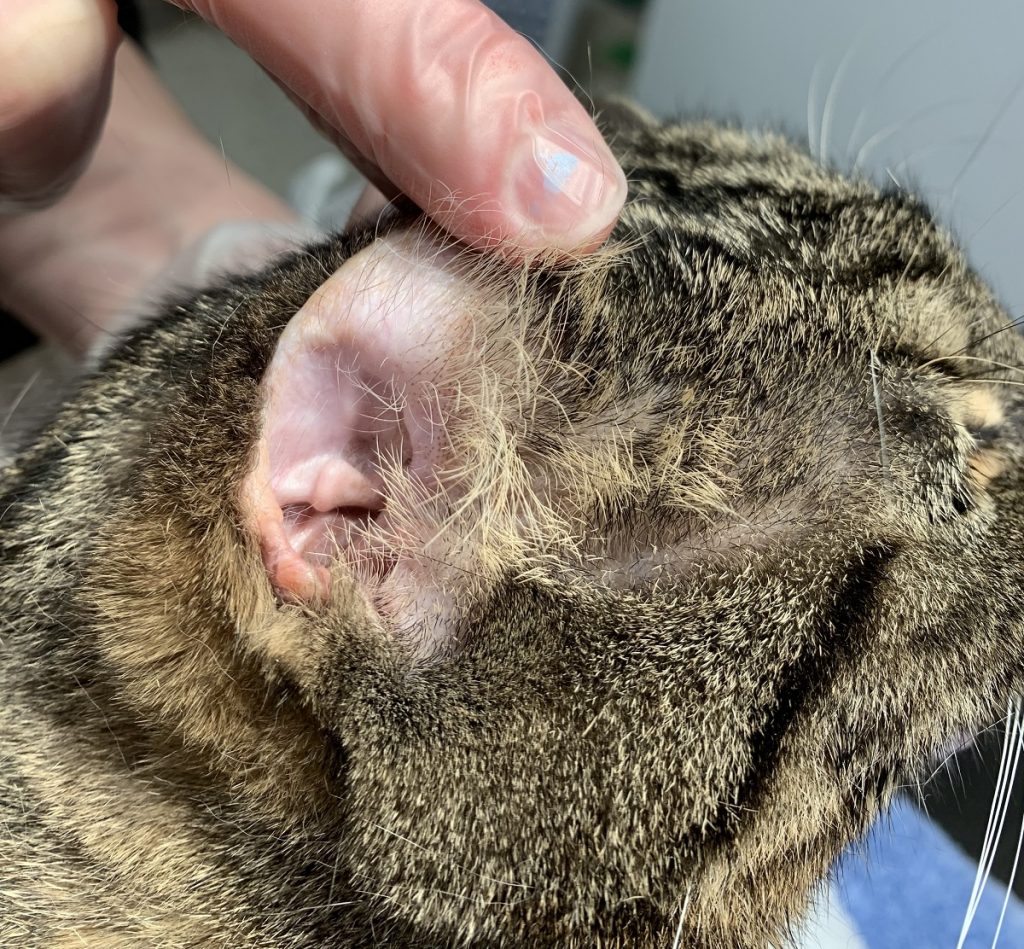 Leishmaniasis is a zoonotic disease (can affect humans and animals) caused by intracellular Leishmania protozoa that are transmitted by sandflies and potentially other blood sucking insects. These protozoa can affect the skin causing nodules and/or open and draining sores on the skin. Leishmaniasis infections have been reported in Europe, South America, Middle East, and a few cases in Texas. In fact, Leishmaniasis mexicana is considered endemic in Texas and has been reported to cause skin lesions in humans, dogs, and cats. The infection is considered rare in cats. A biopsy typically shows intracellular organisms called amastigotes measuring 2-4 micrometers within inflammatory cells called macrophages. The image below lists feline and human cases reported in Texas. 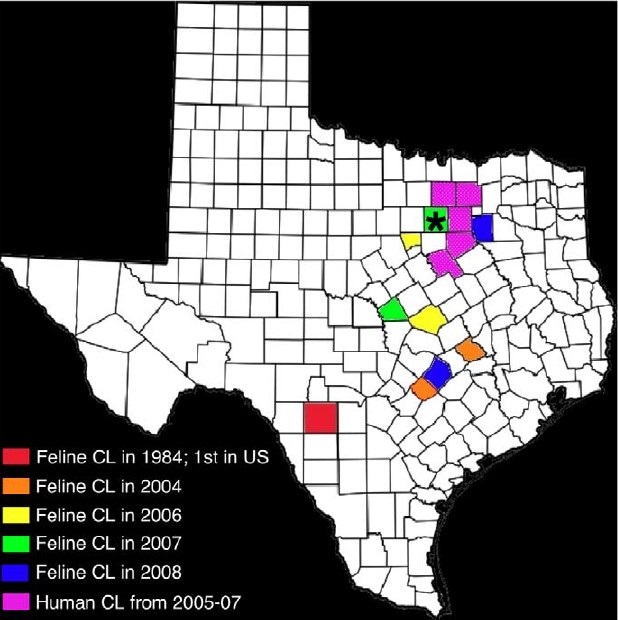 If you would like to schedule your dog or cat for an allergy or dermatology consultation please call or visit Contact Us at DermVets.com